The new practical and versatile software for the verification of reinforced concrete sections, in normal conditions and in fire conditions 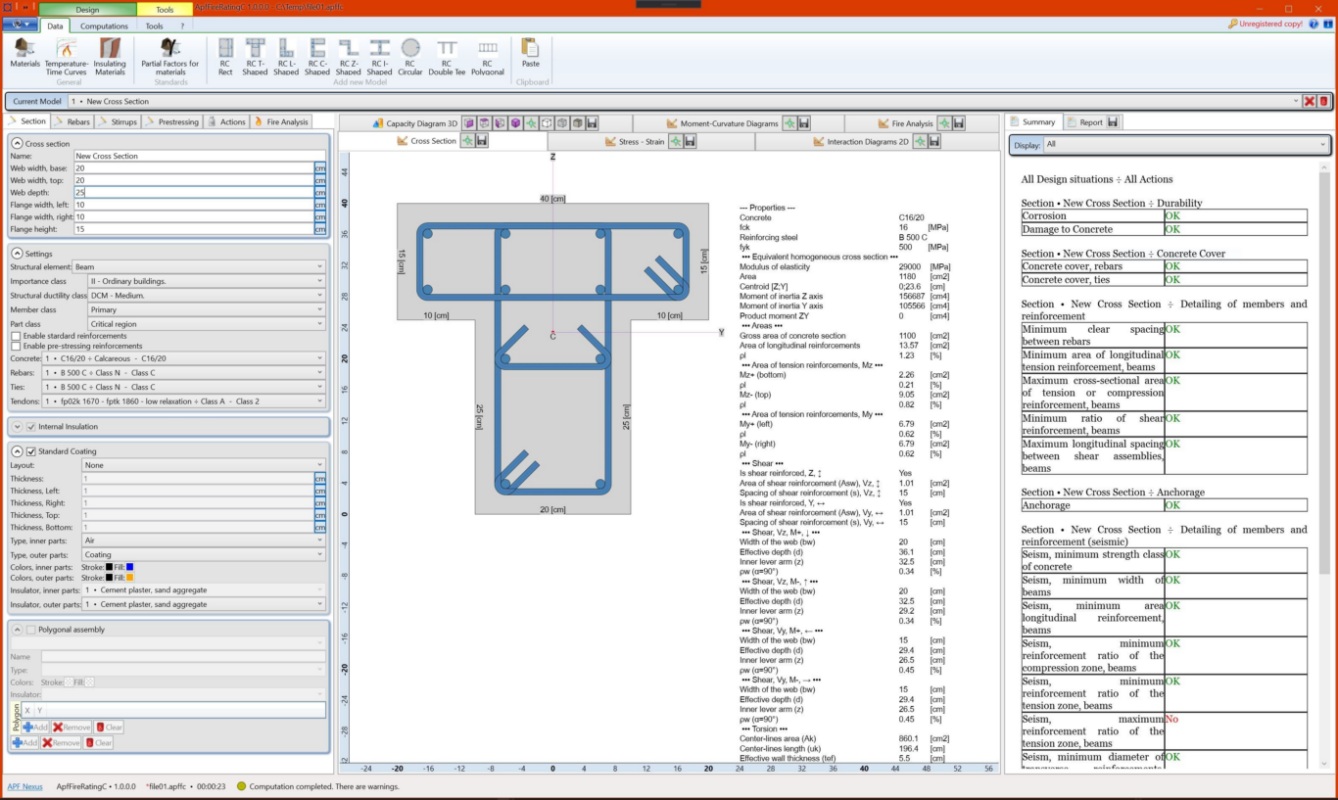 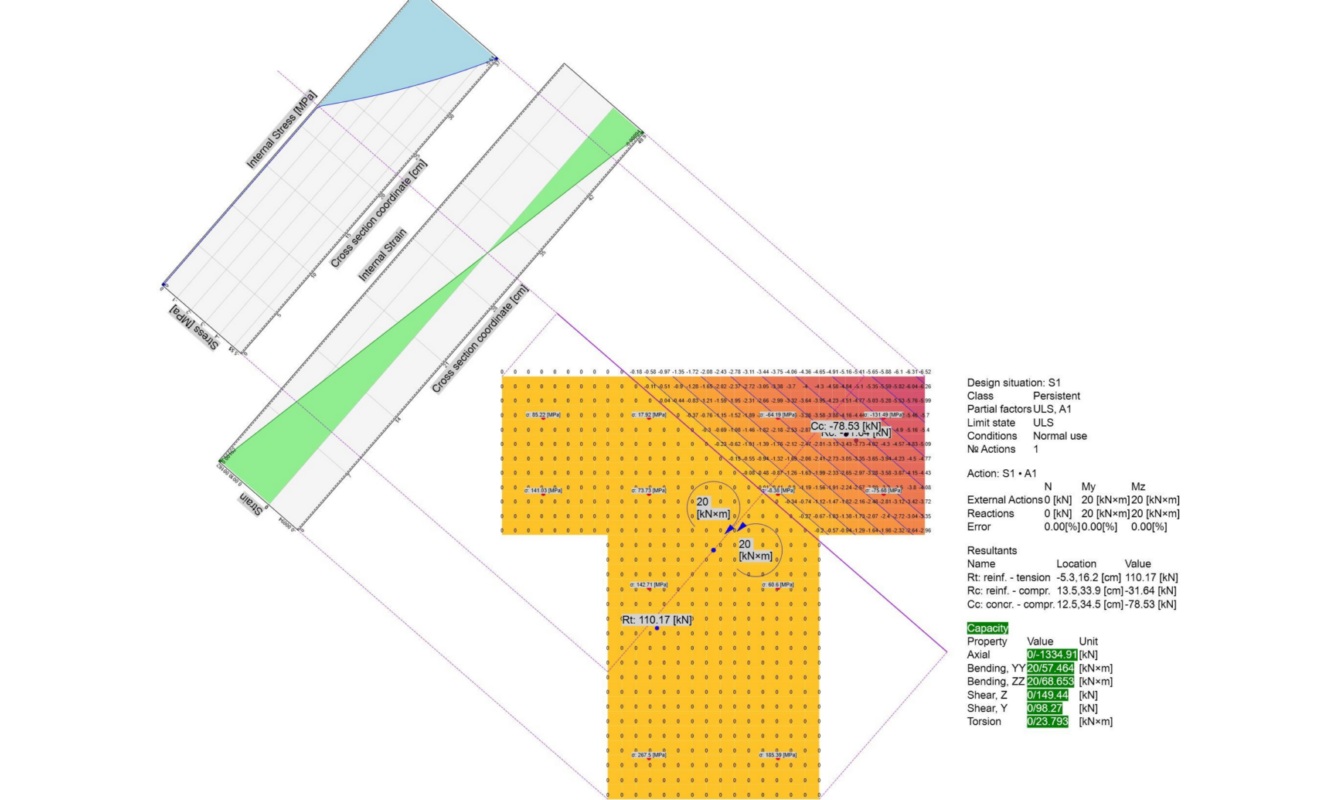 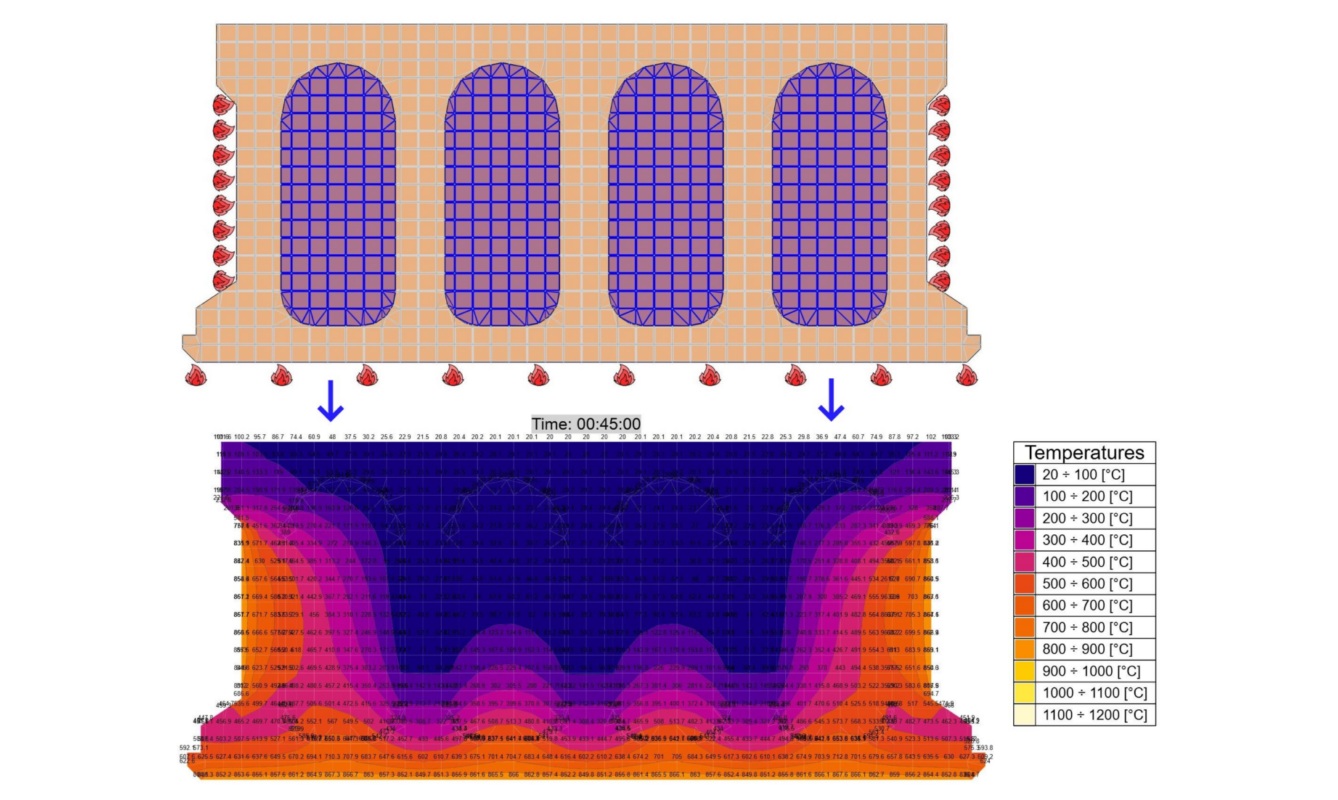 Easy to useEasy to use, but complete in the management of insulating materials and reinforcements.

APF FireRating-C let's You design cross-sections of reinforced contrete and prestressed concrete elements (beams, columns, slabs, ...), in conditions of normal use and under fire exposure conditions, according to Eurocode 2 (EC2).

The cross-section can have any shape, the most commonly used ones are provided, but it is possible to create a section by composing a set of polygons, also considering the holes.
The shape of the cross-section and the position of the reinforcements can also be imported from files with ".dxf" format.

The design for normal use conditions is carried out considering the Ultimate Limit States (axial capacity, biaxial bending, shear, torsion),
and the Serviceability Limit States (stress limitation, crack control).
The design for fire conditions is carried out evaluating the capacity of the heated cross-section (bending, shear, torsion) and comparing it with the relevant combination of actions.
The analysis can be applied to beams, columns, slabs, walls, determining the temperature field in the cross section of these elements by FE thermal analysis in transient regime.
Different types of exposure can be simultaneously applied on the perimeter of the section, to describe in detail the configuration of exposure to fire, including insulators and protective materials.
The advanced computational analysis can establish how mechanical strength of steel and concrete deteriorates during the exposure to fire, and determine how the cross-section's load capacity
is reduced with the increasing temperature.
Nominal temperature-time curves (standard temperature-time curve, external fire curve, hydrocarbon curve) are already provided in the software, parametric temperature-time curves
describing gas temperature can be determined and added by the user.

APF FireRating-C reports warnings that informs you, in case of unacceptable design of the cross-section.

The user interface is designed to simplify Your work, You can change every value (cross section's size, rebar spacing and layout, etc.), recalculate,
and the results are immediately available.

All the design variables, such as numerical values for partial factors, material properties (mechanical properties of concrete and steel for the reinforcement of concrete), can be adjusted by You, according to Your needs (or the requirements
of any National Standard or National annex to the Eurocodes).

Design for normal use conditions.

Uhe ultimate limit state resistance of the cross-sections subjected to axial force and uniaxial or biaxial bending moment is evaluated
considering the parabola-rectangle stress-strain curve for concrete (EN1992-1-1 3.1 and 6.1) and bilinear with inclined top branch for renforcing steel (EN1992-1-1 3.2 and 6.1),
and is based on the calculation of the plane of strain corresponding to the state of equilibrium between the section's internal forces and the external actions.

APF FireRating-C can build Interaction Diagrams for reinforced concrete cross-sections,
expressing the nominal axial and flexural capacities and how they influence and affect one another.

In fire conditions, according to the indications of the Eurocodes EN1991-1-2 and EN1992-1-2, APF FireRating-C evaluates the the ultimate load-bearing capacity of the heated cross-section for the significant Ultimate Limit States (axial forces, bending, shear, torsion).

This analysis has the purpose of verifying that the element maintain its load bearing function during the required time of fire exposure, the "R" in "REI" marking
(R means Load-bearing, the ability of a construction element to preserve it' mechanical characteristics and the relevant load capacity during a normal fire).

APF FireRating-C determines the temperatures in the cross-section (temperature profile) for the required time of fire exposure, in order to determine the reduced strength of the concrete
and of the reinforcement due to the temperature. The temperature profiles allow to evaluate the ability of a structure to reduce within a temperature limit (usually 140°C) the transfer of heat to the unexposed (cold) side,
the "I" in "REI" marking I means Thermal insulation).

The user can define which side of the cross-secion is exposed to fire (for example, a rectangular cross-section may be exposed to fire on
three or four sides, a round cross-sections along its whole perimeter, but many different configurations are possible).
The standard time-temperature curves from EN1991-1-2 are provided by the software's database, but the user can add new curves
from points (time-temperature point values can be added one at a time, line segments joined together end to end are used to approximate smooth curves).

The temperature profile in the concrete cross section are determined by calculation, derived from the geometry and thermal and physical properties
of materials, thermal conductivity and specific heat (but the steel reinforcements are not taken into account).
APF FireRating-C contains the thermal properties for construction materials (defined by some technical standards),
but the user can add new curves to the database, to represent the properties of insulation and coating materials.

Checks that are carried out.

The following SLS are checked: 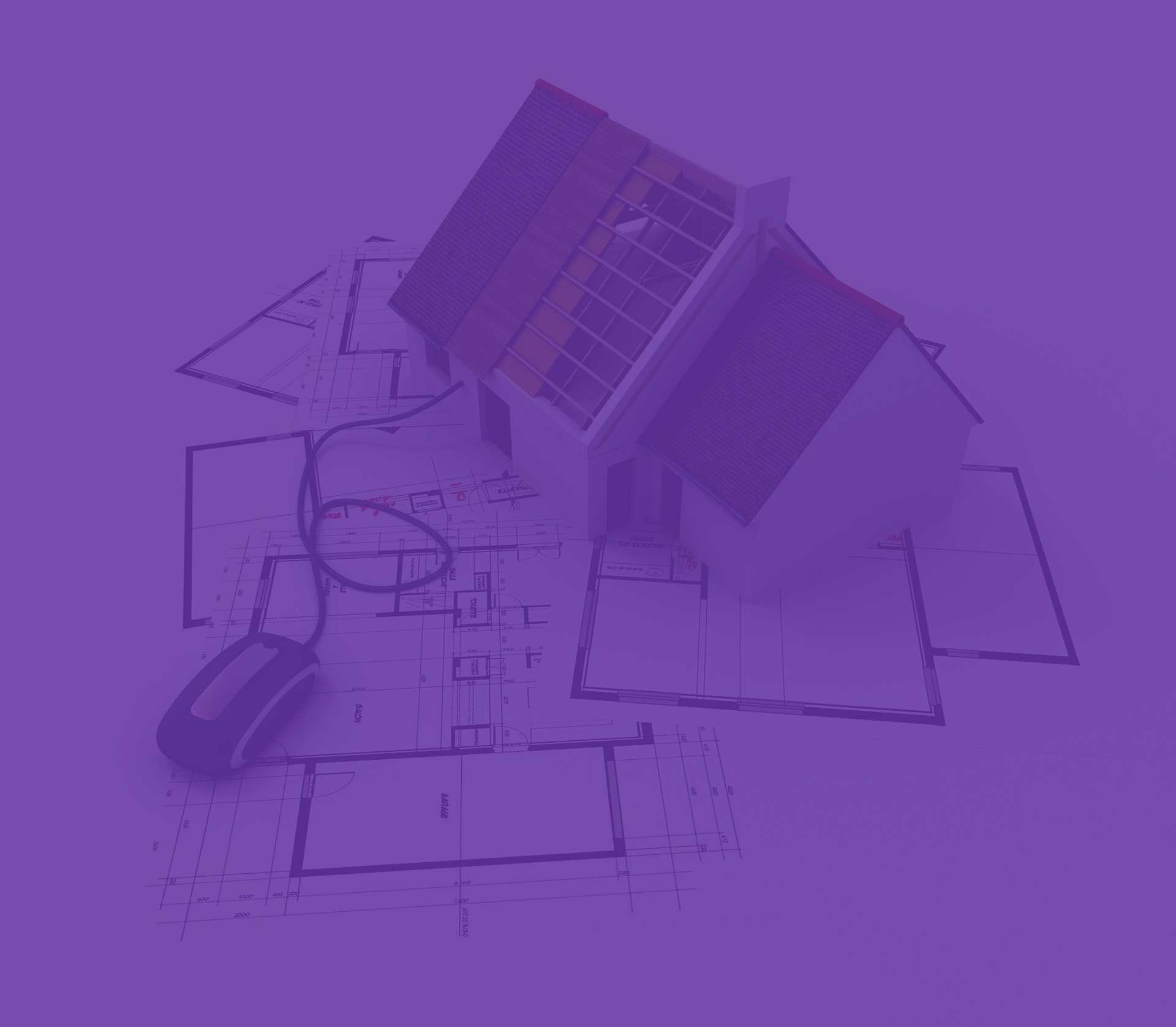 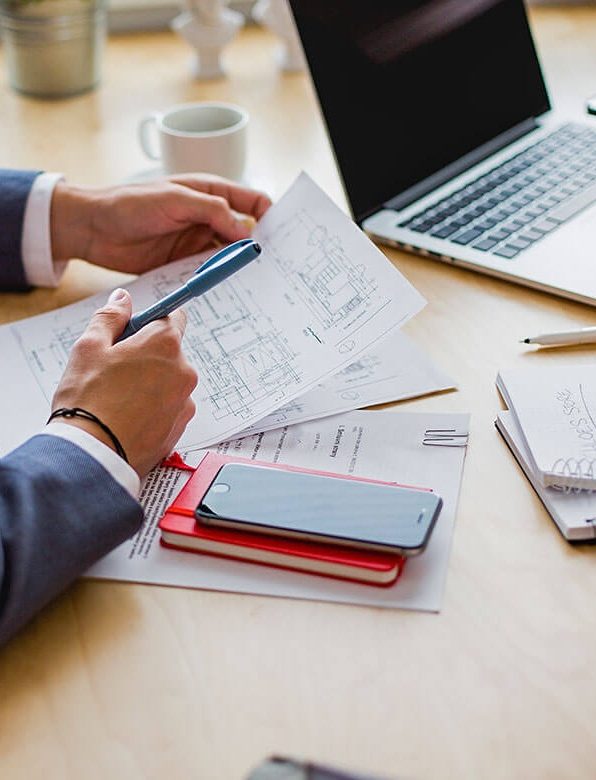